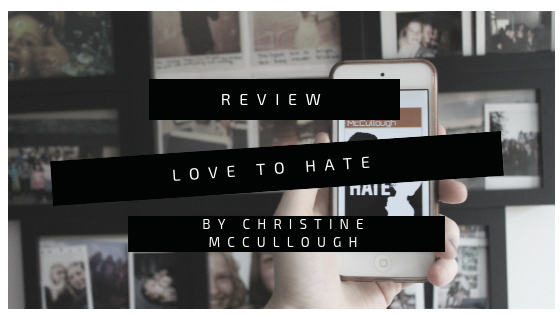 Love to Hate is a LGBT+ romance novel by Christine McCullough, originally published on the writing website ‘Movellas’ in 2015 but published as an eBook in 2016.

The book focuses on Cyrus and Haydon, roommates in Sharpe’s Boarding School. Cyrus has spent a majority of his life going from boarding school to boarding school, always being the new kid, and he has no reason to expect things will change at his newest school. Rather than trying to make friends, he has made his peace with being alone. However, Hayden is hell bent on breaking Cyrus’ icy exterior, not being put off by his attempts to discourage friendship.

Cyrus is terrified that his new life at Sharpe’s Boarding School will leave him hurt as he has been many times before. Although Hayden is everything that Cyrus isn’t (he’s fun, popular, and charismatic), he is equally worried about his true identity tearing his life apart: he is the school’s orphan charity case, and homosexual.

Although this story is driven by the dynamics between Cyrus and Hayden, something which often happens in romances, there is a created conflict which drives the plot forwards, especially with the presence of school bullies and personal secrets. The first chapter may have lacked plot but excelled in character introductions and development. However, the trips out of school to the record store and the side-quest of stealing the flash were both nice of the story, bonding the characters and building on their relationship while still adding to the plot.

McCullough has managed to create realistic characters who are captivating, so well-developed and flawed that they are perfect. Most importantly, the characters are believable, important to a plot that could be greatly based upon real life. Although Cyrus is the narrator of the novel, I was equally drawn to both him and Hayden, intrigued by their contrasting personalities. This raises a lot of questions which I was glad to have answered throughout the story. Why is Cyrus so guarded and bitter? Why does Hayden try so hard to be likeable? Why does Cyrus keep rejecting Hayden, and why does Hayden not seem to care?

Overall, Love to Hate is much more than just a romance novel. McCullough has told the stories of two completely different LGBT+ characters, including ideas about their sexuality struggles in addition to incorporating the struggles of their family and social lives.

I would recommend this book to anyone who enjoys character driven novels and realistic but beautifully written LGBT+ inclusive stories.

My second novel ‘Paper Forests’ is out now! Links to read in my bio and it’ll be updated as more stores pick up the book 🤍
surprise! my second novel 'paper forests' will be released on june 21.
in a place between life and death, a group of teenagers want to find their way home...
coming soon
happy fifth birthday to the firstborn, and here’s to hoping that another will join it on my shelves soon 💛 (now available on amazon in hardcover with new interior formatting) #bitbbook
happy fourth birthday to my first book, and to the characters who stole my heart all those years ago 💛 hopefully i’ll have something special to talk about soon
the end
#beautyinthebreakdown #bitbbook #tandewrites
One year ago, my first book came out. It’s not perfect, but it’s my own story, and that’s kinda amazing
My books on Goodreads