When I started to read this book, I put it down after the first 80 pages and sent a message to my friend to tell her that I felt like I was reading a fanfiction of the first two books. I think the author got too carried away with trying to please the fans: I was someone who wanted more Tella and Legend, but not this much.

It’s sad when a book doesn’t live up to your expectations, especially when you spend a year with it as your most anticipated book. If it was a standalone, this could have been great. But, when you remember that it’s the final book in a trilogy you loved every word of, it’s hard to ignore how it’s missing all the magic you put it on a pedestal for.

I wish I could give it a half star rating, because 3 stars is too low, but 4 stars is too high. I originally gave it 4, but I’m rounding down to 3 because that’s a better representation of my first reaction to the book. It’s almost painful for me to write this review because of how highly I think of the series.

This review has so many potential spoilers that I’m not going to tag them all, otherwise it will just look like a ‘fill in the blanks’.

The characters were what I loved most about this book, so I’m going to focus on them. The book is dual-narrated by Scarlett and Donatella, and features mainly characters that I’ve known and grown to love from the first two books, as well as the addition of the Fates and their mother.

The plot felt weaker in this book than the last two, almost to the point where I didn’t really know what was supposed to be happening. A large portion of it felt too rushed and linear for what I was expecting. Unlike the previous books, it didn’t focus on the mystery of the Caraval and the magic that caught my interest in the first place.

The writing was still stunning. It was so beautiful. So magical. So enchanting. The way Garber writes makes everything seem otherworldly and fairytalelike. I admire her imagination and how vividly she brings everything to life. Caraval world is so detailed and magnificent, and I love how you never know if something is real or not. There’s always a deception, twist and turns.

My one problem with the writing is that she likes to repeat things and its actually kind of annoying. Characters would keep repeating things that happened only a few sentences ago as if we’d already forgotten. The plot itself is also repetitive in some places, focusing on lavish descriptions of beautiful dresses and pretty boys in ‘love triangles’ and damsels in distresses. I felt like most of the time we were being told rather than shown. It’s full of characters speaking in long paragraphs about the history of something. It dragged and made me lose focus. I don’t want to be told everything; I want to see it.

The book felt very anticlimactic. Dramatic events happened out of nowhere with no warning or build up and had very little impact other than being shocking for a few pages. I’m going to put a list of a few of the events that bothered me the most.

The world in this series is something I have praised, but I think this book relies on you remembering the world from the previous books rather than developing a version of it without Caraval.

I loved the myths and the folklore of the Fates. But I feel like we’re never really given true context and explanation of how they work.  It felt like the world was never given a reason for being the way it was. But, I suppose that’s just the way of magic and we’re not supposed to question it.

I found the Fates interesting, but I still feel like the story could have carried on the same without most of them there. They were what I found most interesting about the book – especially their backstories – but they purpose didn’t feel important. It felt more like they were setting up for their own spinoff series.

Also, this is probably another plot point, but I don’t want to even acknowledge the time-travel loophole because that’s one of my least favourite tropes for tying up a loose end. And I still don’t understand why it was necessary.

I think Finale has one of the most unsatisfying endings that I’ve ever read. It just… happened. Everything feels rushed and it wraps up too neatly and all the inconvenient things get ignored. It was a high stakes story which should’ve had so many sacrifices, but the ending was too convenient and too much of a Happily Ever After.

There’s this quote in the book description: “Caraval is over, but perhaps the greatest game of all has begun. There are no spectators this time: only those who will win, and those who will lose everything.” And, spoiler alert: no one loses anything, let alone everything. There are moments where it feels like something could be lost, but the day is saved straight away.

The writing is beautiful. The world is magical. Despite my disappointment, I still completely recommend this series. I didn’t hate this book, but I just didn’t love it either. I know my review sounds very negative and almost ranty, but I loved being back in the world and with these characters again.

Also, I’m going to place a bet that there’s probably going to be a spinoff series or something. Garber definitely left enough space to expand this world, especially with that scene at the market. If you’ve read it, you’ll know what I’m talking about. Also, I’d be totally down for a new story about The Fates.

I’m going to take a moment at the end here to appreciate how stunning the book physically is. I have a Waterstones exclusive hardback, and it has red stained pages and it’s signed and I think there are four different options for what’s written on the front cover beneath the dust jacket. My series no longer matches, but this book is so beautiful that I don’t care. 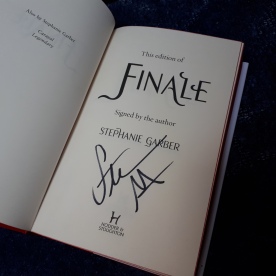