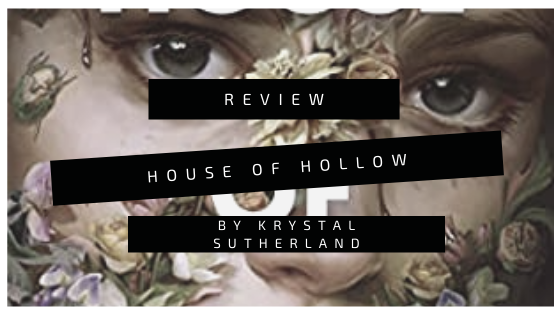 It’s been a month since I read this book and I still don’t have a clue what I read but it was wonderful.

On New Year’s Day ten years ago on a quiet street in Edinburgh, the three young Hollow sisters disappear without a trace as their parents turn away for a kiss. One month later, they suddenly reappear on the same street they were taken with no proof they’ve been gone besides an antique hunting knife and matching half moon scars at the base of their throats. The sisters have no memory of their abduction, but their hair turns white and their eyes change to black and they now have the ability to make anyone fall under their spell (literally). Their father is convinced that these suddenly strange girls are not his daughters, but their overprotective mother refuses to acknowledge that anything is wrong. I think that’s as much as I can say before I start getting into the main plot and spoilers.

There are so many things that I loved about this book. Sutherland’s writing is beautiful, something which I had doubts about before I started reading as I had a mixed experience with one of her previous novels. It has an incredibly fairytale-esque rhythm that makes the story alluring and atmospheric and exquisite and eerie. There’s some beautiful descriptions of character appearances, the clothes that Grey designs, and the environments that they explore. I was drawn in from the first page. I think the thing that I love the most about the writing is that it doesn’t shy away from showing the ugly side and the rotting interior beneath all of the beauty.

This story is very plot driven, so extremely complex and intricate and strange that I’m impressed it worked. However, due to such an overpowering plot, I personally did not feel fully connected to all of the characters, but I think that might have been an intentional choice to add to the unnerving mystery surrounding the sisters. A breakdown of the sisters:

Overall, House of Hollow is a captivating read that had me hanging onto every single word, somehow combining a missing person story and subversive fairytales and horror elements that kept me up at night. I’m so in awe of this book and I would love it if Sutherland returned to this genre in the future. I would also not object if she decided to rewrite the book from the day of the disappearance to current day through Grey’s perspective.

There is so much more I want to say about this book, but I want to keep this review as spoiler free as possible.

One thought on “House of Hollow by Krystal Sutherland [REVIEW]”