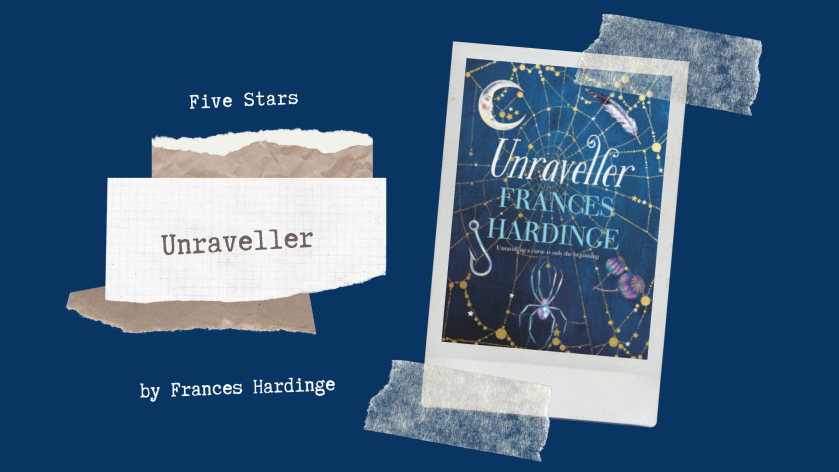 This is the first book this year that I’ve rated five stars and not had a single doubt about that rating. I finally dipped into reading Frances Hardinge this year after years of having her on my shelves and I regret that I didn’t start sooner. I received an advanced ebook copy of this from NetGalley in exchange for an honest review, but I already preordered a copy of this and I will be rereading it the second it arrives.

In a world where anyone can create a life-destroying curse, Kellen has the power to unravel them. He doesn’t fully understand his talent but helps those transformed maliciously – including Nettle, who recovered from entrapment in bird form and is now his constant companion and closest ally. But Kellen has also been cursed, and unless he and Nettle can remove his curse, Kellen is in danger of unravelling everything – and everyone – around him.

First love: the characters. I have so much love for every single person who appeared on the page. I genuinely believe that Hardinge is one of the greatest fantasy authors I’ve read when it comes to giving her characters realistic flaws and allowing them to acknowledge and work through them.
Both of the main characters are uniquely flawed. Kellen is utterly angry and stubborn and brilliantly brave. In summary, he’s a delight and one of my favourite characters of the year. He has anger issues which result in any woven thing he comes into contact with disintegrating. The book’s plot is largely driven by his actions (or inactions) and is a chain reaction of all the decisions he’s made as he’s explored his power and the people he has affected by using it. Nettle is the exact opposite of Kellen: she is gentle and caring and a lot of her emotions are internalised, and I adore her with my entire heart. I love how the author explores the lasting trauma of Nettle’s curse and how her softness and kindness is a conscious choice as a result of it. Also, I love that she never quite adjusts to her human life after being in bird-form for so many years and the impact this has on the relationship with one of her brothers who has chosen to remain as a bird.
The side characters are also unique, well-developed, and interesting, no matter what amount of time they spend on the page. Everyone feels special and relevant to the story whether or not they have a large role in the plot. It was a treat to follow all of them throughout the story.

Second love: the setting. I love this kind of fantasy because it’s both character-centric and world-centric, and the supporting cast of characters was essential to creating this new world by emphasising that there are as many strange and weird people as there are ‘normal’ folk. The world is sprawling and lush and full of detailed care. The author’s writing is vivid and the woodland descriptions owned me. I felt so drawn in. The world was also so deeply and thoroughly explored that, as much as I would love another book or short story spinoff, I’m not left desperate for more (in the most complimentary way possible). I was satisfied that this book is a standalone.

Third love: the weirdness. I have only read a handful of the author’s books so far but I can tell that this is weird, even by her standards. It’s a complicated web of a tale with more depth and more layers than I can explain in one review and it was a delight to be tangled up in it. It’s one of those books where not a single element of it is grounded in reality, yet somehow it just works. In fact, it’s so weird that it straight up defies reality and exists in its own realm of weirdness. I need more of these books that I can only describe as ‘believable nonsense’ in my life.

Fourth love: there is no romance! I wasn’t expecting any from what I’ve experienced from my past Hardinge reads, but there was still a slight fear when I saw opposite-gender main characters, but this book really went and said: let’s talk about friendship. And focused on that with its whole heart. This sweetness was a wonderful contrast to bloodier and more gruesome moments.

This is one of those books that I could gush about forever: the style of the writing, the beautiful twisted woods aesthetic, the characters who are all interesting and dynamic and complex and leap off the page. Everything is a masterpiece. I enjoyed reading this so, so much.

In summary, I am in love with Frances Hardinge and you should be too.
Rating: ★★★★★ (full five stars)

My second novel ‘Paper Forests’ is out now! Links to read in my bio and it’ll be updated as more stores pick up the book 🤍
surprise! my second novel 'paper forests' will be released on june 21.
in a place between life and death, a group of teenagers want to find their way home...
coming soon
happy fifth birthday to the firstborn, and here’s to hoping that another will join it on my shelves soon 💛 (now available on amazon in hardcover with new interior formatting) #bitbbook
happy fourth birthday to my first book, and to the characters who stole my heart all those years ago 💛 hopefully i’ll have something special to talk about soon
the end
#beautyinthebreakdown #bitbbook #tandewrites
One year ago, my first book came out. It’s not perfect, but it’s my own story, and that’s kinda amazing
My books on Goodreads