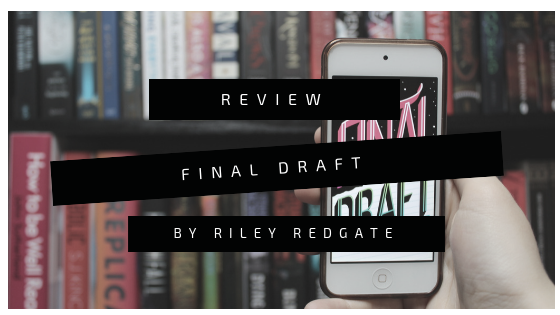 I saw that this was available on NetGalley (shoutout to them) and I was instantly hooked by the description. It said something about being ‘sadistically critical and perpetually unimpressed’ and I’ve never related to something so much in my life.

This book is a treasure. It’s about Laila’s obsession with artistic perfection, and that’s a feeling I know very well. It’s about how the growth of her writing corresponds to her own personal growth. It’s about being shy and learning to expand horizons and branch out into ‘real life’ in a way that is interesting rather than overdone.

Here’s a few more things you need to know about Laila:

This is my first Riley Redgate book so I don’t have much of a reference for her writing style across other works, but I’ve read some other reviews and someone pointed out that she discusses and dissects a topic in a lot of detail but doesn’t come back to it again. But I did notice it a bit in ‘Final Draft’: it feels a bit like going through a checklist of things that have to be mentioned instead of being woven in seamlessly. But I did like that the discussions were happening, and that they were detailed.

The only ‘fault’ I have with this book is how the show and story Laila is writing was tied in with the rest of the book. I skimmed through a lot of those parts: it was a struggle to pay attention or care (mainly because sci-fi is not a genre that hugely interests me). I don’t like when characters go into massive amounts of detail about plots that aren’t relevant to the main plot, but that’s just a personal preference of mine.

Overall, ‘Final Draft’ is a relatable, interesting, and diverse read for readers and writers alike. I can imagine that Riley Redgate will quickly find herself on my list of favourite authors.